Our speaker for February 9 was Michael Arietti from the McLean Rotary Club. He and PDG Sandy Duckworth presented PHS wings to two new PHS members, presented pins to two new Paul Harris Fellows and awarded PHF + 7 and PHF +8 pins to our club president and sergeant-at-arms. Michael presented an overview of the Rotary Foundation.

Our speaker for December was Bill Cawley from the Rotary e-Club for Global Peacebuilders.  Bill and his wife PDG Juanita Cawley have long been interested in Rotary’s role in building peace.

The November 17 Was Neil Hornung

Mr. Neil J. Hornung is a Supervisory Investigator/Branch Chief with the Department of Energy’s Office of Intelligence and Counterintelligence. He has been with DOE for over 10 years. He serves as Branch Chief, Technology Protection Branch, Threat Assessments Division. He leads a team responsible for supply chain risk analysis and committee for foreign investment in the United States and Counterintelligence reviews of research grants and awards to academia and industry.

Mr. Hornung has been awarded the Legion of Merit Medal, Combat Action Ribbon, Navy/Marine Corps Achievement Medal, and numerous Navy/Marine Corps awards. He holds a Bachelor of Arts Degree from Marquette University, a Master’s in Public Policy from George Mason University, a Masters in Science with a concentration in Defense Resource Management, Supply Chain Risk Management from National Defense University’s Eisenhower School, and a Diploma from the Naval War College, College of Naval Command and Staff.

Chuck Davidson has been a Rotarian for 50 years, serving as club president in both El Paso, Texas, and Springfield, Virginia.  He has 47 years of perfect attendance, is a multiple Paul Harris Fellow, a Benefactor, a Sustaining Member of the Rotary Foundation, a Paul Harris Society member, and a level 2 major donor.

At the zone level, Chuck is currently the Zone 33 End Polio Now Coordinator, and edits the Zone 33 Foundation Newsletter.  He previously served three years as a Zone 33 Assistant Regional Rotary Foundation Coordinator.  He has also served three terms on the Zones 33/34 Executive Committee, including as its chair in 2014.

Chuck graduated from The Citadel with a B.S. in Chemistry, and from Florida State University with a Ph.D. in Nuclear Chemistry.  Including two years as an Army officer, he spent 42 years in Government service, culminating as Director of the U.S. Army Nuclear and Chemical Agency.  Chuck was a charter member of the Senior Executive Service.

His many awards include Scouting’s Silver Beaver, the Meritorious Executive Presidential Rank, the Department of the Army Decoration for Exceptional Civilian Service, The Rotary Foundation’s Distinguished Service Award, and Rotary International’s Service Above Self award.

PDG Chuck gave a concise overview of the Rotary Foundation. 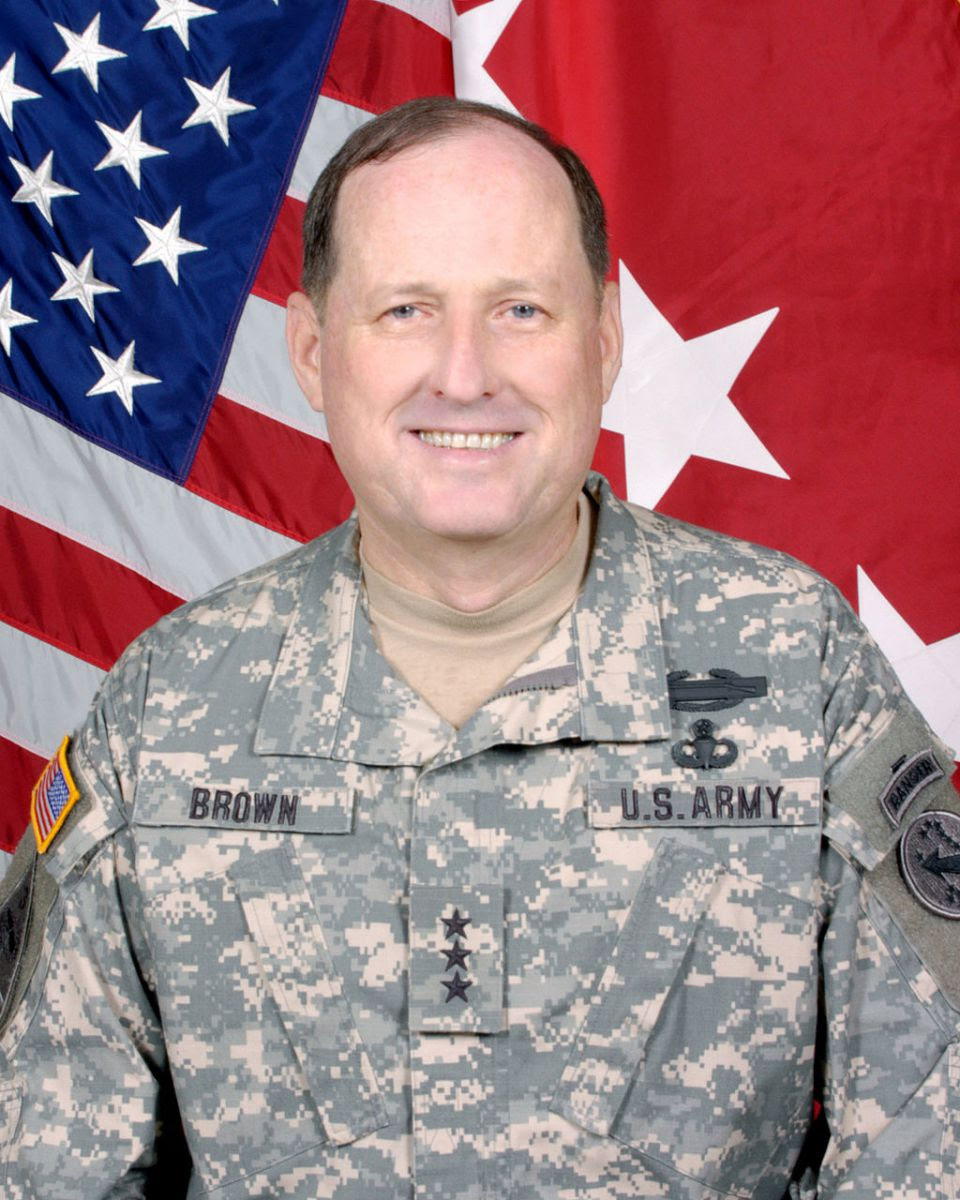 John M. Brown III is a retired lieutenant general of the United States Army. He served as Commander of United States Army Pacific, headquartered at Fort Shafter, Hawaii, from August 25, 2004 to February 1, 2008. He enlisted in the Army as an infantryman in 1969 and became an officer upon completion of Infantry Officer Candidate School in 1971 where he was commissioned a second lieutenant of Infantry.

Brown holds a Bachelor’s Degree in Biology from West Georgia College and a Master’s Degree in Industrial Management from the Georgia Institute of Technology. He is a graduate of the Infantry Officer’s Advance Course, Army Command and General Staff College, and the National War College.

He was born in Atlanta, Georgia, graduated from Avondale High School in 1965, and is the oldest of five. He has a wife and two daughters.

John is an active member of the Rotary Club of Pisgah Forest, North Carolina.

Eva Scott of Integrity Financial Solutions shared 10 Financial Habits of Successful Entrepreneurs with the Rotary Club of Stafford. The information was valuable for entrepreneurs and individuals of all ages. To find out more about your financial health, you can contact Eva at eva@ifsga.net.

Eva lives in Fredericksburg, Virginia with her husband Douglas and their four children.
Eva’s experience as a producer began at Primerica, New England Financial and other firms. Soon realizing that working for big Financial companies she could not really do what she was passionate about, she decided to partner with her mentor Rob Stewart in 2012 and open the Virginia branch of Integrity Financial Solutions.

IFS is small fiduciary, non captive firm that allows us to focus on truly providing real solutions for our client’s specific needs. Helping business owners and individuals wherever they are in their financial journey and designing a path to achieve their goals. IFS specializes in budgeting, debt elimination, college savings, retirement and benefit planning, risk management, estate planning, and tax free retirement.

STAFFORD SPEAKER, NOVEMBER 13
Sue Carter. Rotary Club of Farmville, Virginia, District 7600
An immigrant from Bosnia & Herzegovina, this Longwood University Alumna (B.S. 2006, M.S. 2010) is employed with Hampden-Sydney College as Director of Human Resources. She has also recently served as Adjunct Professor of Sociology at her Alma Mater. Since 2013, Sue has been a committed Rotarian on local, district, and international levels. Locally, she held multiple board positions with Rotary Club of Farmville, was the club’s President in 2017/18, and has received many awards for her service to the community. Upon conclusion of her Presidential term, Sue became a Paul Harris Fellow, and has since joined the Paul Harris Society too. On July 1, 2019, Sue became Rotary District 7600 Assistant Governor for Area 8, and shortly thereafter, she signed up for a humanitarian trip to Ghana to deliver a Global Grant to build a Junior High School in Adadease on behalf of Rotary International and District 7600. Sue is a member of Chamber of Commerce, Associate Member of Hampden-Sydney Volunteer Fire Department, and an avid supporter of many other local charities, non-profits, causes, and volunteer opportunities. When not working or volunteering, Sue is more than likely training for Marine Corps Marathon, travelling, or reading her favorite authors, all alongside her exceptionally supportive husband Nat and dog Merrily!

The speaker for the August 7 meeting was Doug Gately.

Doug is the Director of Jazz Studies at the University of Mary Washington.  Each year, the UMW Jazz Ensemble, under Doug’s direction, and Legal Aid Works ®, formerly known as Rappahannock Legal Services, team up for an extraordinary event called Jazz 4 Justice to benefit our community.  Legal Aid Works ® is a non-profit corporation that provides free, high-quality, civil legal assistance to low income individuals and families.  Doug is the Artistic Director for Jazz 4 Justice, and his professional experience has contributed to the event’s success as an annual fund-raiser for

Wayne Chiles joined the Rotary Club of Springfield in April 1984, representing his employer Bell Atlantic (later renamed Verizon Communications.)  Over the years he has held every office in the Club, some several times, and served as President in RY1994-95.  He served as an Assistant Governor for five clubs during RY2007-10.

In late 2005 Springfield Rotary agreed to get involved with promoting the ShelterBox project in Rotary District 7610, an effort to which Wayne now devotes as much time as possible.   Over the years, Wayne has presented ShelterBox to most of the Rotary Clubs in District 7610, displayed the package at many District events, community activities, some schools- all levels, Scout groups, and many industry events.  Wayne is happy to speak to any group, wherever they may be, for as long as they will listen- with no obligation on their part- just to share the good news about ShelterBox.

retired from Verizon in 2002 and lives in Burke, VA with his wife.  Their children and grandchildren live in Philadelphia, Omaha and Charleston, SC.

Personal: Joe and Sharal Buchanan are empty nesters currently living in Richmond, Virginia. Sharal retired in January 2019 after 35 years as a clinical manager for one of the largest NICU units in the country. They have a married son who is a practicing dentist, and their married daughter is working as a clinical pharmacists. Joe and Sharal have one grandchild. They love to travel and hike throughout the United States.

Professional: Originally from Atlanta, Georgia, Joe has a BBA from Georgia State and has been in the waste disposal and recycling industry for over 30 years. Joe also had a landfill manager certification from the Commonwealth of Kentucky and has a commercial driver’s license (CDL).
He was a managing partner of a 450-acre landfill and waste hauling business in Kentucky from 2007 to 2018 until the business was sold. The Kentucky business had 74 employees with six different locations including the landfill, 4 transfer stations and hauling operations, in
addition to the corporate office. The business collected and disposed of 1.5 million pounds of residential and commercial waste per day. Joe was responsible for all daily operations and with State regulatory agencies.

Rich is currently an Adjunct Instructor at the University of Mary Washington (UMW) where he co-teaches a course on Cooperative Business. He is Chair of the Cooperative Development Foundation, a national c (3) organization that supports the creation of cooperatives as a way of positively impacting economic and social problems.

Rich worked for cooperatives for 40 years prior to moving to Fredericksburg in 2014 with his wife Linda who is an accomplished artist, retired art teacher and member of Art First, a co-op art gallery on Caroline Street in Downtown Fredericksburg. Rich was Senior Vice President at the Cooperative Finance Corporation until retiring from there at the end of 2013, and Legislative Director at the National Rural Electric Cooperative Association where he worked for 12 years. He began his coop career in 1974 with the Rural Electrification Administration (now RUS). Rich was inducted into the Cooperative Hall of Fame in 2017. Rich is active in volunteer activities and is a founding director of the Fredericksburg Food Cooperative.

Rich and Linda have two sons, including Jeremy who is a professor at UMW and David who lives in California. They are the proud grandparents of a wonderful 7 year old.

The speaker for the August 21 meeting was Cathleen Pessolano, the Executive Director at Mental Health America of Fredericksburg. She has a background in Developmental Psychology, Substance Abuse Prevention practices, Mental Health Awareness and Advocacy, and Domestic Violence Intervention services. She and her husband are long-time local residents and have three college-age children.

Before starting as Executive Director in July, Cathleen spent five years in secondary education and nineteen years in human services program management.  After a successful career in helping individuals and families exposed to trauma, Cathleen is eager to advance the mission of Mental Health America of Fredericksburg: to improve people’s mental health and wellness through advocacy, education and supportive services. https://docs.google.com/presentation/d/1seIQZJJ19d-soREzux9kX45ZJLMNKD1NkWK4VlwXaIA/edit?ts=5d61f581#slide=id.p1

John was born in Columbus, Ohio. He earned a bachelor’s degree in environmental sciences from Bowling Green State University and a master’s degree in regional economics from the University of Maine. He enjoys cooking and golf.

The speaker for our July 24 meeting was Sarah Chiles, Director of Fredericksburg SPCA

As Shelter Programs Director, Sarah oversees the staff that runs the foster, intake, transfer, volunteer, social media and outreach programs. With a constantly changing population of animals, Sarah enables the SPCA to scale, while keeping animals, foster and volunteer families, shelter partners, adopters, and staff supported. When Sarah is not saving lives, she is spending time with children, husband, and 4 dogs while binge-watching the latest releases on Netflix and Hulu.